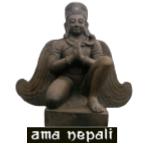 Our mid and late teen children did not grow up fearing enemies, ghosts and pestilence. Hence, explaining the need to wear a protective amulet as the central feature of the रक्षा वन्धन ceremony has always been a challenge. What’s the point, they’d ask, as they awaited their yearly appointment with the ब जू । बाजे । priest on the day of जनाई पूर्णिमा । Janai Purnima. Well..this year we have an answer.

The answer lay in the very words of the रक्षा सूत्र | raksya sutra | protective invocation intoned by the वाजे । Baje during the डोरो लाउने । doro ceremony. As he affixes a specially consecrated cloth capsule enclosing grains of unhusked rice and mustard seeds onto our wrists with a thread of raw cotton steeped in deep yellow pigments, the Baje would utter:

The story behind the श्लोक । shloka is this. On account of hard work and industry of his people, the Danavas, King Bali acquired significant wealth. His rival, Indra, King of the Devas, got jealous. He, Indra, went to Bhagwan Vishnu to complain. It was his right to be the richest among all, Indra said. He did not want to be overshadowed by Bali.

Bhagwan Vishnu favored Indra. He agreed to intervene and neutralize Bali as a threat to Indra. Bhagwan Vishnu assumed the form of Vamana. In the garb of a sadhu, Vamana approached King Bali and asked for alms. Ask and you shall receive, said the wealthy king. Is that a promise, asked Vamana. The promise of a सनातन । Sanatana King, replied Bali. Okay, then, grant me the entirety of your wealth, said Vamana.

King Bali was taken aback by the request. Vaman’s demand was preposterous. But the ways of the Sanatan is such that the King had no choice but to be true to his word. He fingered the protection amulet on his wrist and invoked its promise to grant him forbearance to follow through with his act. Bali concluded his communion with his doro. Holding a strand of कुश । kush along with a pinch of जौ-तिल । barley and black sesame seeds on his right hand and a आचमनी । spoon used during pujas discharging a stream of water on his left, the Great King performed the rites of the दान ।daan. Bali walked away from his kingdom, head held high, his integrity intact.

Forbearance. The promise of the rakshya is that it will inspire us to stay true to our path. As did King Bali, so too the wearer of the raksya amulet. This is the meaning we deduce from the रक्षा सूत्र । raksya sutra.

The ghosts and goblins, enemies and misfortunes, inadequacies and deprivations–they are all but constructs of our minds. We ask our children to be mindful and vigilant. We hope they will stay true to their path as they mature as adults in a seemingly value-free world. The Janai Purnima will be an annual reminder to them–indeed, to us all.